A POSTMORTEM ON A SHEEP

WARNING: The images below are grisly.

I have a friend who has some sheep he keeps more or less as pets. Until a few days ago he had four; now he has three. One of them—they're all ewes—had a massive mammary gland tumor. And when I say "massive," I mean it: the thing was the size of a football.  Apparently the ewe had been carrying it around for at least four years.  A colleague who's a veterinary pathologist was visiting him in Blacksburg and advised him it was time to euthanize the ewe.  I had previously told him that if he were planning to cull his flock, I'd like to have an older ewe, as the only way I can get mutton is to kill and process it myself.  He asked me to come out and put the ewe down, and if the carcass was edible I could have it, but his friend wanted to do a post-mortem to determine if the tumor was malignant, and whether it had metastasized.  This was agreeable to all concerned, so at 1:00 we three met at his house, the ewe was corralled, and we did the deed.

I have a Schermer livestock killer, a captive-bolt type that will stun/kill anything up to the size of an ox. When he asked me to come he specifically requested that I use that and not a pistol. Normally I use a .32 revolver for sheep slaughter, but for some reason he didn't want me to do that.  He didn't explain why and I didn't ask why he'd made this request.

If you've never seen a livestock killer in action, it's quite impressive; certainly not something you'd want to get in the way of.  Some killers are "free-bullet" types, essentially small pistols, but my Schermer isn't.  It "fires" a hardened steel rod almost half an inch in diameter out the bottom for about 6-8 inches. The bolt's travel is limited by the body of the killer. Killers of this type are widely used in the slaughter industry: it's basically a dedicated machine for that purpose. The charge to fire it is what looks like a large percussion cap—actually, that's what it is—and while I have no idea how fast the bolt moves, it's damned fast. It's incredibly loud, too: I once fired it without ear protection and my ears rang for days afterwards. For sheep you put the thing on top of the head, push the trigger, and BANG! down goes the sheep stone dead in an instant from a "shot" in the brain.

Once the animal hits the ground, the standard procedure if you plan to eat it is to cut the carotid artery by sticking a very sharp knife behind the lower jaw and pushing in, forward, and down. This by the way, is one method Fairbairn and Sykes recommend for quietly assassinating sentries.  Since the sheep's heart will pump for about 2-3 minutes after it's clinically "dead," all the blood will come out. I'm not sure how much blood is in a sheep: it depends on body weight, but standard tables give a figure of 60 ml per kg, so a 100-pound sheep (45 kg) would hold about 2-3/4 liters. There was a lot of it, however it's measured; and it squirted about three feet until the heart stopped beating. 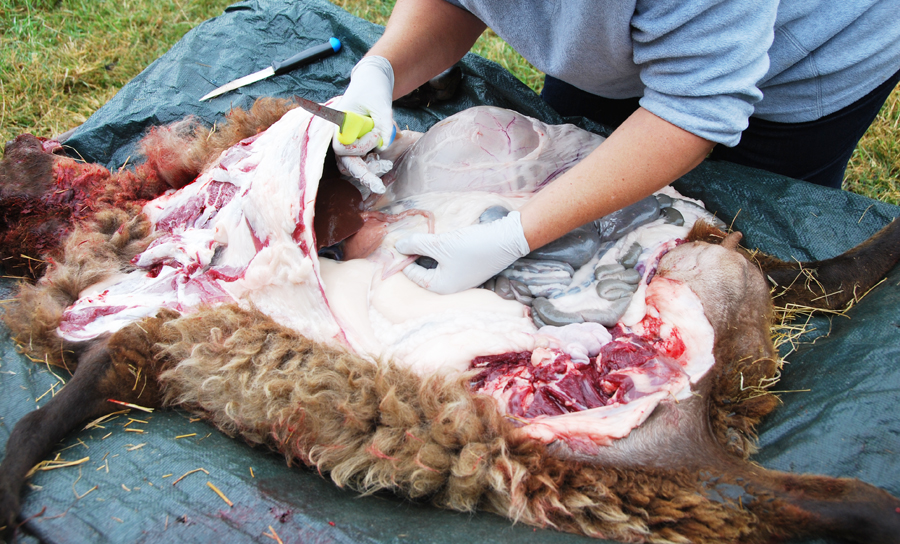 At that point the necropsy began.  We dragged her out of the barn and laid her out on a board. The pathologist skinned back the hide, then started digging around in the innards.  She had told me that if there were no metastases, it was OK to eat the meat; one of the functions of a meat inspector is to look for such things.  Alas there were indeed mets: in the lungs, the liver, and one or two other organs, so the meat wasn't safe. She collected samples of all the inner organs and some other locations and preserved them for future examination: eventually the carcass was conveyed to the local dump. 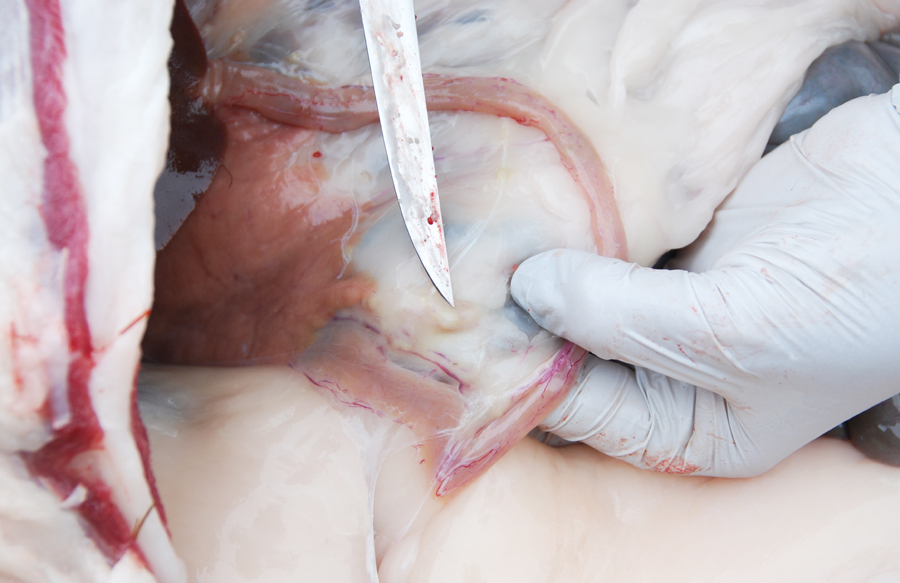 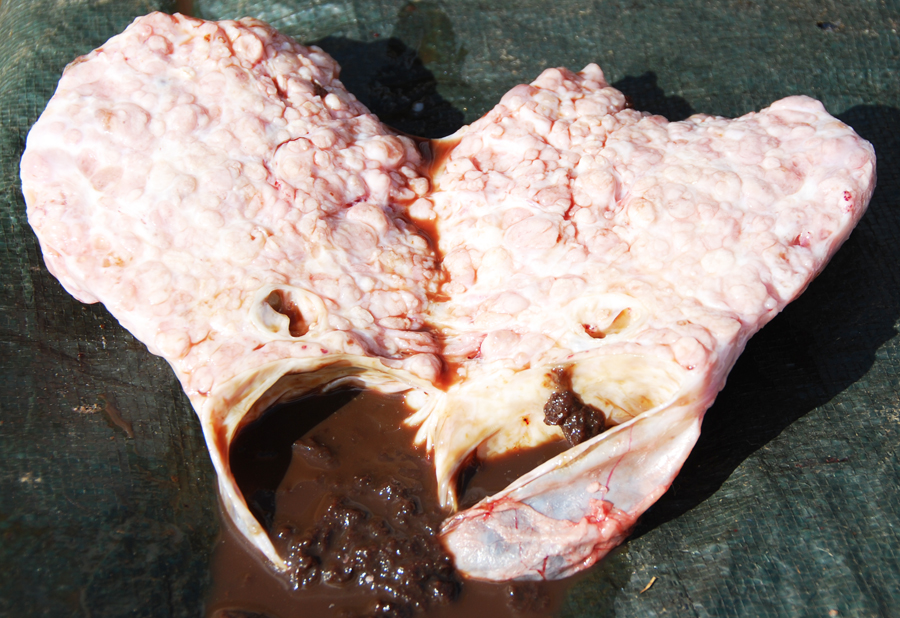 Even though I didn't get a carcass out of it, it was a fascinating exercise and I'm glad I had a chance to participate.  The huge tumor was very odd; and mammary tumors are apparently very rare in sheep, something I hadn't known. My friend and his friend will write this case up for a journal.  My role for the afternoon was to act as the "scribe," taking notes of the pathologist's remarks and findings. Like all pathologists she was very thorough and very meticulous, and periodically was delighted with what she found: "Gosh, that's cool!" and "Wow, would you look at that!" and so forth.  I even wrote some of those comments down, like any good scribe would do.

It was an interesting way to spend an afternoon, three hours in all.  But I hope the next time he wants to cull a ewe it will be one who's for the chop because she's stopped dropping lambs, not one that has a loathsome disease.