I’m not superstitious. I’m scientifically trained, and I need evidence for the existence of something. Not being superstitious I’ve always looked skeptically at the notion that supposedly inanimate objects have the ability to convey to a human in some subtle way what their true nature is. It sounds impossible…but there is evidence for this happening. Nor is it necessary to understand the mechanism behind a frequently observed phenomenon to accept its reality. After all, no one can yet explain the exact nature of gravity but no one questions its existence, do they?

So, using honed and disciplined scientific training, astute observational skills, and in light of ingrained skepticism, I have come to the conclusion—based on carefully gathered, impeccable but solid, even if purely anecdotal—evidence that there is such a thing as a “Lucky Gun.” A Lucky Gun is one that has had imbued into its wood and metal the ability to shoot straighter or to hit harder than similar guns. Even more mysteriously, a Lucky Gun is one that seems to draw game to itself by its mere presence, even though we don’t know how this happens. You will always know when you encounter a Lucky Gun: it will be just right, and you immediately are infused with confidence and foreknowledge of how it will perform when you take it afield.

Theories abound to explain this well-documented if poorly understood singularity. One is that the way a gun “feels” when you pick it up transmits the knowledge that the gun is Lucky. Maybe it’s a perfect fit, or has excellent balance, or is especially handsome. Another theory holds that it’s the way the sights align perfectly when you put the gun to the shoulder.

I once had the enormous privilege of handling the double rifle Theodore Roosevelt took to Africa on his famous 1909 safari. I put it to my shoulder with my eyes closed: when I opened them the sights were perfectly aligned. I can say with absolute confidence that TR’s Holland & Holland double rifle was a Lucky Gun, and assert that it told me it was. If a spiritualist medium held a séance with that rifle on the table I wouldn’t be the least bit surprised if the ghost of the late President emerged from one of the barrels and confirmed that.

I have some Lucky Guns. My little Husqvarna Model 640 (at left) is a good example that supports my hypothesis of gun-human communication. Even when we were still separated by thousands of miles and had never physically encountered each other, just from a photo on an auction site I knew it was a Lucky Gun. The Husky said, “Buy me! Buy me! I am RIGHT for you! I am a Lucky Gun! Buy

me!” I bought it and have been rewarded for my faith in its message. From its first day in the field it’s racked up many successes. Whenever I had it in hand I’d see more and better game than I did when using other rifles. On safari in Namibia, in the space of a few days it found, attracted, and knocked over five animals, including a first-class springbok (right), a big zebra, a warthog or two, and inter alia, a huge eland; all of them one-shot kills, too.

It’s been equally successful on whitetailed deer, finding for me the two

biggest bucks I’ve ever taken; and it whistled up a nice feral hog. I shoot better with it because of the way it “feels”; but why is it that when I hunt with it I only get shots at first-class animals? Plus, the only way to account for foreknowledge that it is a Lucky Gun is that it told me to buy it when I saw its picture on an auction site. This is more evidence that there simply has to be some sort of long-distance rifle-human telepathy going on. I’m equally certain that this rifle picked me out, not the other way around. Why? Because no one else bid on it. Obviously this rifle wanted to be mine. The circumstances of how I acquired it and the success that I’ve had with it can only be explained by the theory that we communicate with each other.

Another Lucky Gun is a .54-caliber Thompson-Center “New Englander” sidelock muzzle-loader. Nowadays a plain-vanilla sidelock with iron sights garners snickers but in this case I know better. The New Englander’s proportions and dimensions fit me perfectly, it hits like Thor’s Hammer, and animals just seem to pop up out of the ground when I hunt with it.

In this case it took a while for the Luck to emerge. I bought the rifle because I liked its looks, but for first two seasons I hunted with it we hadn’t “bonded” and I had no shots. I suppose we were still exploring the depth of our linkage and as Ann Landers might say, we were “still in the dating phase” of our relationship. But by the third season in the field the wooing was over. The New Englander announced itself to be a Lucky Gun and it’s been that way ever since. I’ve lost count of how many deer it has taken—all one-shot kills—and with it I handily executed a very nice old warthog who left this world so quickly he still doesn’t know he’s dead.

Just this season it proved itself again. After two fruitless hunts with another T/C (a lovely “Big Boar” .58 that has never yet been successful) I took the New Englander out for a third session. I got a shot at a doe: I was sure I’d missed, but the gun told me, “No, it was a hit. You will find the deer in a ditch next to the road exiting the property.” And so it proved: as I drove out there she was, stone dead, exactly where the rifle had told me she would be. I will never doubt it again.

My third Lucky Gun is a 1940-vintage Burgsmüller drilling. This beautiful piece also contacted me through a sales site, saying “The price is right, I am gorgeous, and I am Lucky. Buy me, or you will forever regret not doing so.” I accepted its proposal and ever since have had a spectacular run of successes on deer, feral hogs, and a big ostrich. Just this week I took it out again: late in the evening it caused a deer to materialize out of thin air forty yards from where I was sitting. One shot from the rifle barrel knocked her down, dead before she hit the ground. 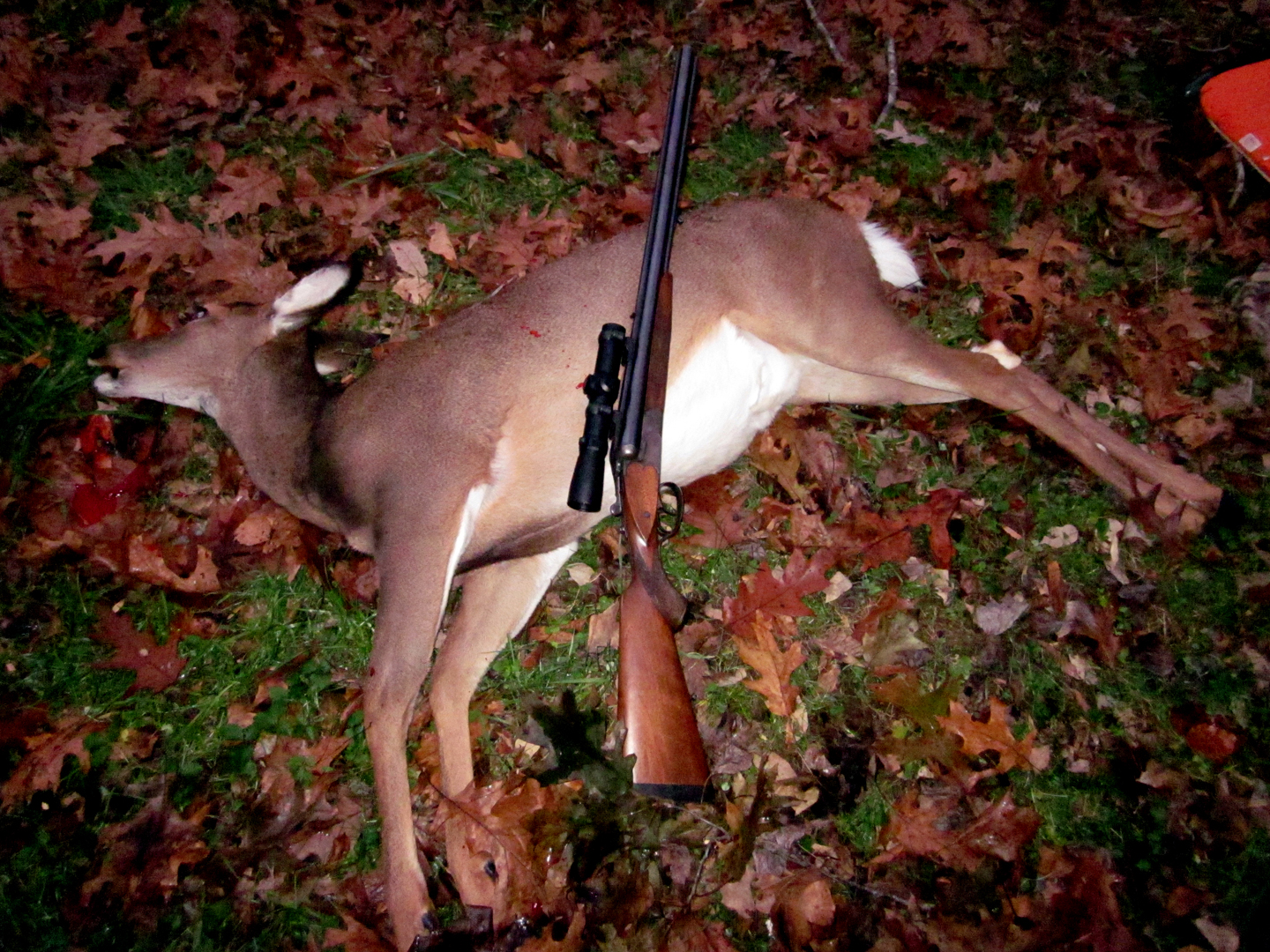 As past experience has demonstrated often the gun finds you, not the other way around. Eight years ago I won a pretty Kimber rifle in a raffle. I’ve never had much luck with raffles, but that Kimber stacked the deck in my favor because it wanted to be mine. I have all of $60 in it, and in every season since I won it, it’s done what was needed and found me game.

Before I understood the quintessential truth about the existence of Lucky Guns, I did some foolish things. One of them was trading off a little Rossi .32 revolver with which I never—and I mean never—missed my target. I could hit anything with it: I once shot a bird out of a tree using that snubbie, which should have told me something. But I was too naïve to realize what had happened and in a bout of careless and cashlessness, I let it get away. I’ve often regretted selling a gun, but few have been more regretted than that one. I subsequently bought an identical Rossi .32 but it wasn't lucky: and I couldn't hit anything with it. Thus I know that the luck is imbued in a specific firearm, and seemingly identical ones may or may not—usually not—hold in them the same good fortune.

There are also, of course, Unlucky Guns. These don’t attract game, they don’t hold zero, and they are indifferent to success. My .58 is like that. It shoots very well at the range but the one time I did get a shot at a deer with it, I missed, at all of twenty-seven yards! In the time since I’ve given that rifle a chance to mend its ways and to reach some sort of accommodation with me, but it seems this will not happen. There is no mutual feeling, no empathy between us: and no game, either.

So…if you find yourself with an otherwise nondescript firearm that nevertheless seems always to work in your hands, don’t let it get away. It may well be a Lucky Gun. And…when your time comes to stop hunting, be sure to pass it on to some worthy successor, making sure that he or she really understands what a treasure a Lucky Gun is.